Book Review and Giveaway - The Stone and the Secrets Author: Jan Davis Warren On Tour With Celebrate Lit

Book: The Stone and the Secrets 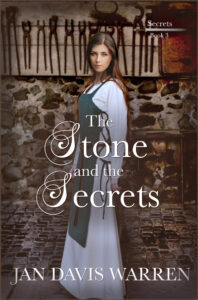 Science has always been her haven…until a secret expedition proves more dangerous than she bargained for.

Lady Elise Stanton loves the Lord, her family, science, and William Degraf. William was always around to help with her experiments—at least, until she reached marriageable age. Unable to convince him that it is not a noble bloodline that makes a man worthy, but a noble heart, she turns to science to soothe her disappointment. She’s admitted to the School of Scientifica in London, far from her home at Brighton Castle. She’s eager to join a scientific expedition intent on tracking down a large meteorite strike. The hope is their study will unlock secrets of the universe, which will help mankind. Superstitions and fear surrounding the stones threaten the expedition. As dangers mount, William’s unexpected arrival could be the answer to her prayers…or the harbinger of more peril to come.

William Degraf chooses to join the king’s army to escape the growing secret love he has for Lady Elise. He is a low-born innkeeper’s son and not worthy to marry a lady of noble blood. His plan is to rise in ranks and one day earn great honors to declare for her hand. That hope is shattered when he loses his right leg in battle while saving his best friend from the enemy’s lance. When he receives information that a group of assassins have been hired to kill the king and all with noble blood, he must warn Elise and her family. Can he reach Elise in time to protect her from danger, then stand aside and watch her marry another?

Jan Davis Warren is a mother, grandmother, and a young-at-heart great-grandmother. Her wonderful husband passed away the same year she won the ACFW Genesis Award for Romantic Suspense. That win and many others are encouraging reminders that God wants her to continue writing even in the tough times. Learn more at www.janwarrenbooks.com.

Writing The Stone and the Secrets was as much a joy as it was a challenge.

Book 3, The Stone and the Secrets was also to complete the series, but as soon as it was finished, I knew there would have to be one more. I already have the title, plot, and the characters, but I’ll share more about that another day.

As a writer, I love getting to know the characters. Before the story is finished, it’s like I’ve known them their whole lives. It’s fun, but challenging to allow the characters to evolve without pushing them to the end too soon. Spoiler alert. I absolutely LOVE a happily-ever-after ending. It gives me, as the author, a satisfying feeling of closure. You can laugh, but it’s true.

The hero and heroine in The Stone and the Secrets are not the typical h/h you might imagine living in medieval times.

The beautiful and intelligent, Lady Elise Stanton has a long and impressive royal linage. Because of her heritage, protocol demands she marry someone with an equally impressive noble bloodline. The problem is, Elise has no interest in protocol, titles, or matchmaking, and refuses to be courted by empty-headed men who know nothing of using a forge, or mending a broken carriage axle. She’s a scientist whose curiosity about the how things work has gotten her into trouble since she was old enough to take things apart. With her creative mind, she is always thinking of new things to invent. Her first attempt to fly almost got her killed, but for our hero, William Degraf’s timely intervention.

He’s saved Elise many times during their childhood—a challenge he gladly accepts for he loves her deeply. However, William’s love for Elise is not to be. He must sacrifice his love so she can fulfill her destiny, which means marrying a man with title and wealth, neither of which he has. He is strong, handsome, and of noble character, but has not a noble bloodline.

Once Elise becomes of marriageable age, he realizes seeing her courted would be too painful, so he joins the king’s army. By becoming a knight, he hopes to forget her.

As I got to know Sir William Degraf, a knight of the king’s army, I can tell you, there’s not a braver or more loyal man to be found in all of England.

In the title, The Stone and the Secrets, the stone was initially meant to represent the meteorites, which Elise is determined to locate. She feels they are the answer to finding a unique metal needed for a secret project.

To my unexpected delight, in the midst of writing this story, I realized the “stone” also represents the Lord, our Corner Stone, the Rock of Ages, the Stone that the builder rejected, and much more.

This is also an adventure story, so, of course, there’s hidden treasure and several villains, each with a goal to kill, steal and destroy. Assassins, murderous pagans, and a madman intent on revenge, all who are determined to wreak havoc along the way.

Which begs to question. With so much coming against them…

Can William reach Elise in time to save her, this time from a fate worse than death?

And, with William being a lowborn commoner, and Elise of noble blood, how can they possibly have their happily-ever-after?

I’m so excited. I can’t wait to tell you. They…

Oh, no, I’ve used up all my allotted words. Sorry, I guess you’ll have to read The Stone and the Secrets to find out.

May God bless and keep you, and give you peace.

The Stone and the Secrets is written by Jan Davis Warren. This is book three in the Secrets series. I have read all the books in the series, but they can be read as stand alone books. This is set in Medieval times. This is not a time period that I read often. The author captured my attention right within the first few pages.

I loved the main character Lady Elise Stanton. She is different then other characters that I have read. She is interested in Science. In the beginning she is testing one of her scientific creations. William has always helped with her scientific experiments. When he becomes of marrying age he joins the King's army and buries the secret love he has for Elise. He does not feel he is of noble ranks since he is an inn-keeper's son. William was stubborn. The romance building was sweet and built at a comfortable pace.

The characters are well written, the storyline is intriguing, I feel like the author captured the time period well.

For Him and My Family, November 7

The Meanderings of a Bookworm, November 14

To celebrate her tour, Jan is giving away the grand prize of a $50 Amazon gift card!!