The great state of Alabama

I know that I have been posting a lot of book reviews lately - trying to work on several different projects. I am also trying to adjust to being a stay at home mom. I have been substitute teaching the last few months, but school is out and Colton (6) and Wyatt (4) are now home with me full time. So that has been an adjustment. I have always worked full time. BUT God is faithful. It's been an adventure. So, because of it I am juggling lots of different balls now. History is my passion. I love reading about it.

As most of you know, I moved out of state almost a year ago. It's hard to believe that it's been almost a year. I look back and I am so thankful that I followed God's prompting and moved.

EVERYONE is thriving. We have learned so much since moving. God is faithful, he does not always show us the whole journey he is about to take us on. Just trust HIM.

That being said, I have not been able to enjoy as much as I have wanted to seeing local sites.

The last few weeks I have been able to see and learn about some interesting things. I wanted to share some of them with you.

Alabama has a bad rap. It's a stereo type that only backward rednecks live in this state, and they say the education is terrible.

Those are rumors. Alabama is full of some down to earth, friendly, helpful, AMAZING people. It's full of exactly what we wanted for our children. The school system we are in is AMAZING. I feel like it is better from where we were.

SO, here are some amazing things I have seen and learned about this great STATE! 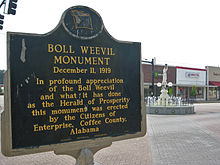 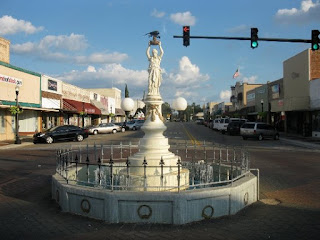 What is a boll weevil you ask? I had no idea until I moved here.

Why do we have a monument for an insect?

From Wikipedia:  a prominent landmark and tribute erected by the citizens of Enterprise in 1919 to show their appreciation to an insect, the boll weevil, for its profound influence on the area's agriculture and economy. Hailing the beetle as a "herald of prosperity," it stands as the world's first monument built to honor an agricultural pest.[2]

The Monument consists of a statue of a woman holding a pedestal with a boll weevil perched on top.

So, this used to be a cotton growing area. However, cotton was not selling like it should. This lovely insect, the boll weevil, came through and ate all the cotton and destroyed all the crops. Why is this a good thing? They discovered they could grow peanuts. Peanuts turned the wiregrass area around and allowed them to become a city of progress.

So, if you ever are heading to Panama City, FL take a detour and check this out in the middle of downtown enterprise, while you are there check out some of the CUTE southern charm you will see.

2. Dale County Confederate Monument
This is located in downtown Ozark. It is a monument for the Confederate Soldiers who fought in the Civil War. 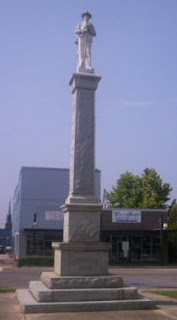 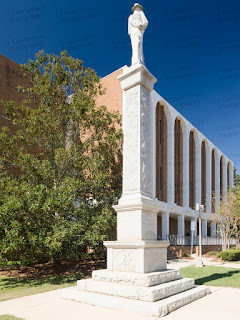 We got  chance to visit this when my inlaws came down to visit us. There is a REALLY good restaurant that we went to in Ozark called; Our Place Diner.
See them on FB: Here

With all the controversy going on in the news, it's nice to see that some of these monuments will be able to remain standing. The Civil War was a very bloody battle. It pitted father against son, brother against brother, friends against friend.

We were coming back from the Montgomery Zoo a few weeks ago and stopped in Troy to get something to eat. I pass this all the time when I go up to Montgomery.
Y'all. The shack looking BBQ joints in Alabama always seem to have the best BBQ. 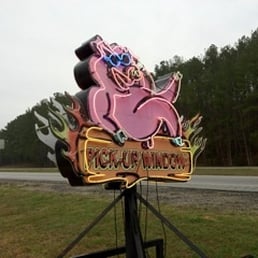 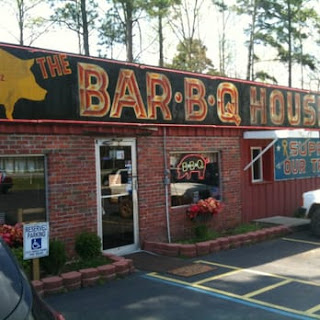 4. Huggin Molly -- Abbeville, AL
We took a scenic route to Atlanta this time. We rented a car from the Dothan Airport, and per google maps not back tracking to jump on 85/65 in Montgomery was the way to go. SO, we passed through Abbeville. There is a big sign when you hit the Abbeville City limits that looks like this: 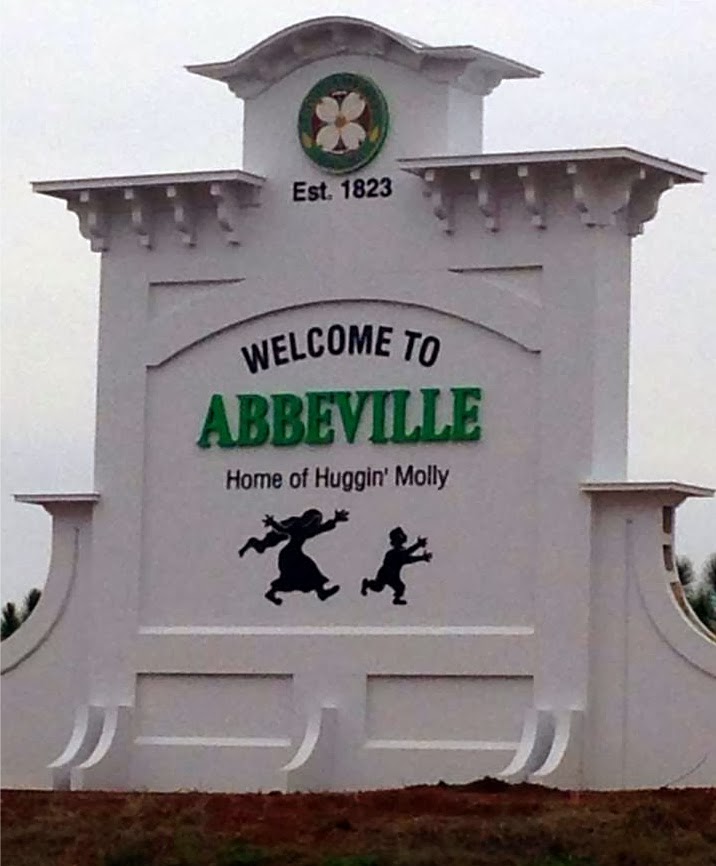 This caught my eye. I was driving, so David looked it up.

Here is a fun story about a legend that is still popular today
(courtesy of: http://www.hugginmollys.com/legend)

Generations of Abbeville children have listened wide-eyed to their parents tell the story of Huggin’ Molly. They have hurried home on nights lit only by the moon’s glow, certain they saw something in the shadows, afraid she would be around the next corner.
The story goes, if you stay out past dark at night - be prepared to have your parents send "Huggin Molly" after you.
Jimmy Rane, an Abbeville native and lifelong resident, grew up hearing the legend of Huggin’ Molly. For him and his friends, she was as real as the trees that rustled in the wind at night.

“Anybody who grew up in Abbeville grew up knowing the legend of Huggin’ Molly,” Jimmy says. “If your mother or dad didn’t want you to be out after dark, they’d tell you Huggin’ Molly would get you. And you believed it, too.” 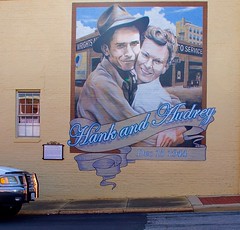 I love country music. LIKE LOVE IT. I love more of the classic country that has the twang. When I was in Andalusia I saw this mural. I wanted to see why it was there.
Some say that Hank Williams is one of the fathers of country music.
What I did not know, is that Hank and Audrey got married in Andalusia, AL December of 1944

There is so many more places that I can't wait to visit -- enjoy this virtual tour!