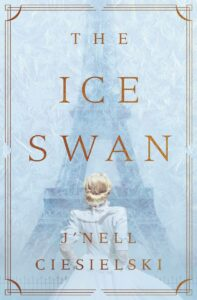 Amid the violent last days of the glittering Russian court, a Russian princess on the run finds her heart where she least expects it.

1917, Petrograd. Fleeing the murderous flames of the Russian Revolution, princess Svetlana Dalsky hopes to find safety in Paris with her mother and sister. But the city is buckling under the weight of the Great War, and the Bolsheviks will not rest until they have erased every Russian aristocrat from memory.

Born the second son of a duke, the only title Wynn MacCallan cares for is that of surgeon. Putting his talents with a scalpel to good use in the hospitals in Paris, Wynn pushes the boundaries of medical science to give his patients the best care possible. While treating Svetlana for a minor injury, he is pulled into a world of decaying imperial glitter and underground Russian clubs where drink, culture, and questionable dealings collide on bubbles of vodka.

Out of money and options, Svetlana is forced into a marriage of convenience with Wynn, who will protect her and pay off her debts. It’s the right thing for a good man to do, but Wynn can’t help hoping the marriage will turn into one of true affection. As the Bolsheviks chase them to different corners of the earth, Wynn and Svetlana begin to see they will never be able to outrun the love they have for one another.

With a passion for heart-stopping adventure and sweeping love stories, J’nell Ciesielski weaves fresh takes into romances of times gone by. When not creating dashing heroes and daring heroines, she can be found dreaming of Scotland, indulging in chocolate of any kind, or watching old black and white movies. Winner of the Romance Through the Ages Award and the Maggie Award, she is a Florida native who now lives in Virginia with her husband, daughter, and lazy beagle. Learn more at www.jnellciesielski.com.

When we think of the Great War we often only think about events happening right on the battlefield of France, Belgium, and Germany. It was a time of great upheaval for so many people and countries, none more so than Russia. It was during the Great War that the Bolsheviks rose up against the monarchy, assassinated the tsar and his family, and plunged Russia into civil war. The country was in such chaos that they pulled out of the war to deal with their own revolution. The Russian Revolution was the result of centuries of oppression and imperialism that finally boiled over. As the Bolsheviks seized power, nobles and anyone associated or favorable to the monarchy were stripped of their privileges and homes, many killed, and still thousands of others fled in fear of their lives where they became the great wave of White emigres.

The stories of the ill-fated Anastasia and the evil Rasputin are legendary, but it wasn’t until recently when I watched a Russian miniseries called Road to Calvary that I became fascinated with the nobles and their struggle and from all that an idea sparked that would become my upcoming release, The Ice Swan. It’s about a Russian princess fleeing the Revolution to Paris in 1917 where she meets a handsome surgeon who is breaking new grounds in cardiology. We see the plight of the White emigres who have taken refuge in Paris and founded their own little Russia in the heart of the city, the exhausted City of Light after four years of war, the overflowing hospitals, and highly controversial advancements in surgery. Plus, a romance to prove that true love can overcome any difference and who doesn’t need a little more love these days?

The Ice Swan is a historical romance that is written by J’Nell Ciesielski. I have been reading a lot of books that have focused on the Great War recently, from different authors, and different perspectives. This book focuses on a Russian Princess. While, I have a masters in military history, I really did not know how the Great War affected Russia. I learned a lot through reading this book. The author did some amazing research.

Svetlana Dalsky, her mother and sister have fled to Paris for refuge. The Bolsheviks want to erase all the Russian nobles - even those who have gone into hiding. Paris has become a city for many that are fleeing their worn torn countries. Svetlana knows that she has to be careful who she trusts.

Wynn MacCallan, who is son of a duke, does not care about that title. He cares about the fact that he is a surgeon. He is in Paris due to the war. He meets Svetlana to fix a minor injury and he can tell that she is not like others. He is drawn to her. He finds out that she has been supporting her family dancing and she confides in him the real reason they are in Paris. He proposes a marriage of convenience. He sends his new bride, her mother and sister to his Scottish estate. Will Svetlana and her family be safe? Will the Bolsheviks find them?

I am impressed with the well written characters. I am impressed by the well researched story line. I really enjoyed this book. I look forward to reading more from this author.

Where Faith and Books Meet, July 19

Reflections From My Bookshelves, July 20

For Him and My Family, July 23

To Everything There Is A Season, July 24

Inside the Wong Mind, July 25

Through the fire blogs, July 31

Labor Not in Vain, August 1

The Adventures of a Travelers Wife, August 1

To celebrate her tour, J’nell is giving away the grand prize of a paperback copy of the book!!