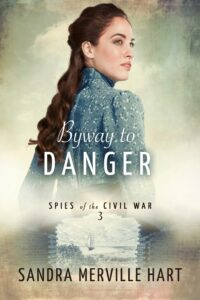 Everyone in Richmond has secrets. Especially the spies.

Meg Brooks, widow, didn’t stop spying for the Union when her job at the Pinkerton National Detective Agency ended, especially now that she lives in the Confederate capital. Her job at the Yancey bakery provides many opportunities to discover vital information about the Confederacy to pass on to her Union contact. She prefers to work alone, yet the strong, silent baker earns her respect and tugs at her heart.

Cade Yancey knows the beautiful widow is a spy when he hires her only because his fellow Unionist spies know of her activities. Meg sure didn’t tell him. He’s glad she knows how to keep her mouth shut, for he has hidden his dangerous activities from even his closest friends. The more his feelings for the courageous woman grow, the greater his determination to protect her by guarding his secrets. Her own investigations place her in enough peril.

As danger escalates, Meg realizes her choice to work alone isn’t a wise one. Can she trust Cade with details from her past not even her family knows?

Sandra Merville Hart, award-winning and Amazon bestselling author of inspirational historical romances, loves to discover little-known yet fascinating facts from American history to include in her stories. Her desire is to transport her readers back in time. She is also a blogger, speaker, and conference teacher. Connect with Sandra on her blog, https://sandramervillehart.wordpress.com/.

In Byway to Danger, Book 3 of my “Spies of the Civil War” series, both Cade and Meg—our hero and heroine—are Union spies living in Richmond, the Confederate capital in 1862. As if this isn’t dangerous enough, Meg is also a former Pinkerton spy. One Pinkerton spy was hanged in the spring and three others now sit in Richmond jails.

Meg works as an assistant in Cade’s bakery. The strong, quiet man keeps a secret from Meg to protect her, for he’s a conductor on the Underground Railroad. He provides food, clothing, and a safe place to stay until he’s able to take them on to the next stop several miles outside the city. Cade has done this for years before the Civil War and continues as the war rages, a perilous mission.

Historically, early in the war on May 23, 1861, three men escaped slavery and fled to Fort Monroe. Frank Baker, Shepard Mallory, and James Townsend had worked on Confederate fortifications before escaping on a rowboat. They sought the safety of Union soldiers at the fort. The men informed Union Major General Benjamin F. Butler that they escaped from Confederate Colonel Charles K. Mallory of the 115th Virginia Militia.

The next day, Confederate Major John B. Cary arrived at Fort Monroe under a flag of truce. Cary met with Butler and requested he return the enslaved men to Mallory as required by the Fugitive Slave Act.

Butler did some fast thinking. Since the three men had been building fortifications for war, they could be seized as “contraband of war” and didn’t have to be returned. His refusal to return the men was a pivotal decision and sparked a future law that protected fugitives who sought the protection of Union camps.

Dozens of fugitive men, women, and children had joined Baker, Mallory, and Townsend at Fort Monroe within three days. Many others fled to the fort in the following months. “Grand Contraband Camp” was established about three miles from Fort Monroe on the charred remains of Hampton to accommodate the hundreds of fugitives.  It was the nation’s first self-contained black community. By 1865, thousands lived in this camp.

Part of my research for this novel involved a trip to Virginia’s Fort Monroe. (If you love history and have never visited Fort Monroe, I recommend it!) Though I wasn’t certain of my story at the time of my visit, I was so inspired by the fort’s history that I knew it had to be part of my story. And it is!

Avenue of Betrayal, Book 1, is set in the Union capital of Washington City (Washington DC) in 1861, where a surprising number of Confederate sympathizers and spies lived. Boulevard of Confusion and Byway to Danger are set in Richmond, the Confederate capital in 1862. Actual historical spies touch the lives of our fictional family.

Through both real and fictional characters, this series highlights activities spies were involved in and some of the motives behind their decisions.

I invite you to read the whole “Spies of the Civil War” series beginning with Book 1 Avenue of Betrayal, Book 2 Boulevard of Confusion, and Book 3 Byway to Danger!

Byway to Danger is book three in the Spies of the Civil War series that is written by Sandra Merville Hart. I have been fortunate enough to read all three books. While you could follow along if you had not, to grasp the whole series and all the characters who make appearances in the whole series - I would recommend that you read them in order.

This is Meg's story. Meg was widowed over a year ago when her husband, Thomas drowned while fishing. She had moved in with her cousins in Washington City, then onto Richmond to stay with Bea and Annie's Aunt Trudy. Richmond has a lot going on during this time period. It's the Confederate Capital it's a hot spot for information for spies on both sides. Meg has gotten connected with Union Spy, Elizabeth Van Lew. She uses her work in the bakery to listen to information. Meg also used to work with the Pinkerton Detective Agency.

Cade is also a widower. He lost both his wife and son during child birth. Like Meg, he is also a Union Sympathizer. He has secrets of his own that he keeps. He knows that Meg is aiding the Union and he suspects to what degree. As time goes on, his growing love for Meg becomes hard to contain. Can two broken widowers find love in the midst of war?

One of the best things about this series is the historical accuracy. I did heavy research on the use of women and African Americans as spies during the Revolutionary and Civil War. I liked seeing names I was familiar with come to life in this story. The author did a good job capturing authenticity of the time. It was also nice to catch up with previous characters that had their stories told already. I am sad to see this series end, because I have enjoyed it so much.

Thank You to the author, publisher and Celebrate Lit for allowing me to read a copy of this book. All thoughts are my own.

Spoken from the Heart, July 22

For Him and My Family, July 27

To celebrate her tour, Sandra is giving away the grand prize of a $50 Amazon gift card!!