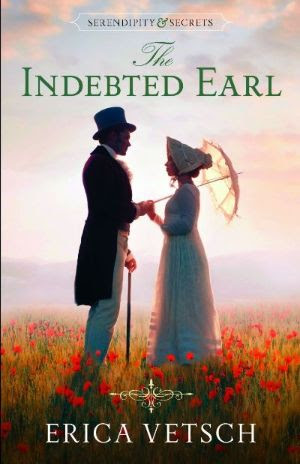 The Indebted Earl by Erica Vetsch is book three in the Serendipity and Secrets Series.  I have been fortunate enough to read all three books - and they are all wonderful. While they can be read as a stand alone - I highly recommend reading the entire series from the beginning. The author has a gift of the past. She writes her stories so descriptively that you close your eyes and feel like you are watching it all unfold. She has done her research to make this Regency Era book real.

When Charles arrives at his new estate - it is in need of a lot of TLC. There are wayward girls and a lot to get into order. Charles proposes to Sophia a marriage of convenience. She accepts. She wants to help get the new estate in order.

Charles will eventually return to sea - which is where he seems the happiest. Sophia will stay behind and help raise the girls that they were left in charge of. Sophia has fallen in love with these girls, and Charles' mother. However, Charles is caught up in a smuggling charge. Sophia realizes how much she has come to care for her husband. I loved watching their love grow. I loved watching Sophia go from a brokenhearted fiance to a mature wife. I loved watching the three adults and children become a family.

I received a copy of this book through the author and Read with Audra. All thoughts are my own.