Book Review and Giveaway - The Lady in Residence Author: Allison Pittman On Tour with Celebrate Lit

Book:  The Lady in Residence 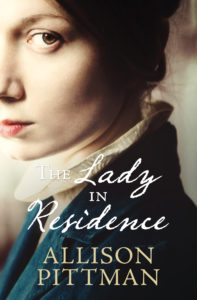 Can a Legacy of Sadness be Broken at the Menger Hotel?

Visit historic American landmarks through the Doors to the Past series. History and today collide in stories full of mystery, intrigue, faith, and romance.

Young widow Hedda Krause checks into the Menger Hotel in 1915 with a trunk full of dresses, a case full of jewels, and enough cash to pay for a two-month stay, which she hopes will be long enough to meet, charm, and attach herself to a new, rich husband. Her plans are derailed when a ghostly apparition lures her into a long, dark hallway, and Hedda returns to her room to find her precious jewelry has been stolen. She falls immediately under a cloud of suspicion with her haunting tale, but true ghost enthusiasts bring her expensive pieces of jewelry in an attempt to lure the ghost to appear again.

In 2017, Dini Blackstone is a fifth-generation magician, who performs at private parties, but she also gives ghost walk tours, narrating the more tragic historical events of San Antonio with familial affection. Above all, her favorite is the tale of Hedda Krause who, in Dini’s estimation, succeeded in perpetrating the world’s longest con, dying old and wealthy from her ghost story. But then Dini meets Quinn Carmichael, great-great-grandson of the detective who originally investigated Hedda’s case, who’s come to the Alamo City with a box full of clues that might lead to Hedda’s exoneration. Can Dini see another side of the story that is worthy of God’s grace? 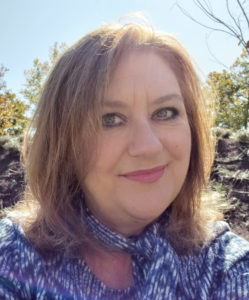 Allison Pittman is the author of more than a dozen critically acclaimed novels and a four-time Christy finalist—twice for her Sister Wife series, once for All for a Story from her take on the Roaring Twenties and most recently for the critically acclaimed The Seamstress which takes a cameo character from the Dickens’ classic A Tale of Two Cities and flourishes her to life amidst the French Revolution. She lives in San Antonio, Texas, blissfully sharing an empty nest with her husband, Mike. Connect with her on Facebook (Allison Pittman Author), Twitter (@allisonkpittman) or her website, allisonkpittman.com.

From Haunting to Healing: How Stories Bring New Life to Old Ghosts

If you really think about it, every story is a ghost story. Not the floating spirits of the dearly departed kind, not bumps in the night or mysterious howling in the darkness—but the best stories come from examining a haunted heart. Memories that pursue the present.

A few years ago I took the walking tour of haunted San Antonio. It was a lark, a fun tourist-y thing to do with some visiting friends. I’m not a believer in ghosts, but I am a collector of stories. The tour opens at the Alamo—sacred ground of slain soldiers. The second stop is the Menger Hotel, listed as one of the most haunted hotels in the United States by those who measure and evaluate such things. And while the tour guide waxed on about the guests’ litany of haunted experiences (including Teddy Roosevelt raging through the lobby), my mind stuck with the story of Sallie White. Sallie White is the Menger Hotel’s most famous ghost—a chambermaid whose apparition is reported to be seen walking the halls, towels draped over her arm, or to be heard as an efficient two-rap knock on your door late at night. My mind, however, didn’t dwell on Sallie the ghost, but Sallie the woman—just a normal, hard-working, poor woman, murdered in the street by a man who claimed to love her. But for that, she would have passed into history unknown. Instead, her story is told every night as strangers gather on the very sidewalk where the crime took place.

Years after first hearing the story of Sallie white, I stayed in the Menger for a few days to gather details for The Lady in Residence. I booked what they call a “Petite” room—meaning it is a room that maintains its original structure. Read: tiny. Exposed pipes, creaky wooden floors, antique furniture—the only update, the bathroom fixtures. As it turned out, my room was directly above the place where Sallie White was murdered. One night I pressed my ear against the glass and listened to the ghost tour guide tell her story. The next morning, I stood in the exact spot with a fancy Starbucks drink, thinking about her. She lives on, not because people claim to see her walking and hear her knocking in the dead of night, but because she is a woman remembered.

So, is that beautiful? Is it ghoulish? Maybe it’s both, but when I was given the chance to write a story set in and around the Menger Hotel, I was determined to make Sallie White’s story a part of it. I didn’t want to write her story—that would have required embellishment beyond those few historic, factual tid-bits that such a woman left behind. Sallie White didn’t have correspondence to catalog or a journal to give us insight to her thoughts. Instead, I wanted to tell it to readers everywhere who might never make it to San Antonio to hear it for themselves. When you read The Lady in Residence, you are going to hear the true story of Sallie White, all of it taken from a newspaper account of the time. And then, I did what all historical writers do…I folded it into my own tale and folded that tale into another.

That’s really the joy of writing a split-time novel—being able to draw back and shoot a narrative-arrow straight through the hearts of two stories, threading them together, to bring a haunting to a place of healing.

The Lady in Residence by: Allison Pittman is a Christian Historical novel that spans two different time periods. This is the first book that I have read by this author. This book is part of the Doors to the Past series. This is a stand alone book since the other books in the series are written by other authors. In this book, the author has crafted a intriguing story. We see Dini Blackstone. Dini is also a 5th generation magician. She also gives ghost tours. She is very familar with the history of the places that she is giving, and that includes the story of Hedda Krause. Hedda lived in 1915. She checked into Menger Hotel  with a trunk and enough funds to let her stay for a few months. Hedda is a young widow. Hedda knows that she needs to find her self a rich husband so that her needs will be cared for. Hedda's story has been passed down throughout time. Hedda was robbed by a ghost. When Detective Irvin Carmicheal investigates there is a real mystery on their hands. Dini meets  Quin Carmicheal the great-great-grandson of the detective. The two of them try to solve the century old mystery.

I loved how the author sprinkled breadcrumbs throughout the entire story. You have to pay attention and put it all together. I love how the author wrote real feeling characters. They had pain, sadness and loss. It is different to see a paranormal theme in a Christian genre - but it did not bother me at all.

For the Love of Literature, February 24

Where Faith and Books Meet, February 24

For Him and My Family, March 2

By The Book, March 4

To Everything There is A Season, March 8

To celebrate her tour, Allison is giving away the grand prize package of a $25 Amazon gift card and a copy of The Lady in Residence!!