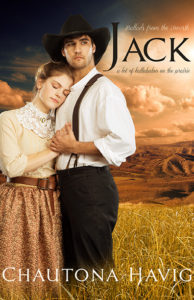 Jack Clausen doesn’t need anyone but his horse and a boss who won’t interfere in his personal life—or lack of one.

Sure, he’s a lonely cowboy, but better lonely than brokenhearted.

If only he hadn’t met a girl who made him hope that honest and true women do exist. Maybe he wouldn’t be riding off into a snowstorm with a fresh determination to avoid women—indefinitely.

When Hazel Meissner sees a cowboy risk life, limb, and horse to save a child, she knows he’s someone special. When he finally gives her his heart, she considers herself the most blessed woman alive.

However, when he rides off without a word, she wonders if her heart will survive the loss.

One broken man. One trusting woman. One orchestrated misunderstanding that tears them apart. What’ll it take to bring Jack home again?

It’s Shakespeare’s Much Ado about Nothing mashed up with the old ballad, “Cowboy Jack.”  Don’t miss a cast of characters inspired by the Bard himself—especially Dirk and Deborah (Benedick & Beatrice).

Jack: a lot of hullaballoo on the prairie. 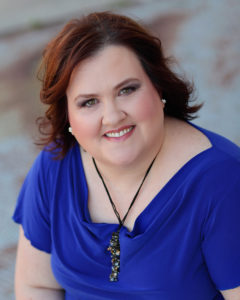 Chautona Havig lives in an oxymoron, escapes into imaginary worlds that look startlingly similar to ours and writes the stories that emerge. An irrepressible optimist, Chautona sees everything through a kaleidoscope of It’s a Wonderful Life sprinkled with fairy tales. Find her at chautona.com and say howdy—if you can remember how to spell her name.

The Inspiration I Hate to Love

The plaintive notes of a ballad filled the living room. People sat on couches and chairs or stood in the doorway, listening. Three steps up the staircase, out of view of most of the room, a little girl sat, chin in her hands, listening.

If you looked close, you’d see freckles dotting her nose and crooked teeth that never were too large for her mouth like most children’s were. Just a bit closer, and you’d see wide, hazel eyes riveted to the man with the guitar seated on the hearth. To his right, a cup of coffee and sometimes a shot of whiskey.

With a voice like Jim Reeves (the non-twangy Reeves, mind you), the songs told stories, like all ballads do—a little blind girl praying for her father’s future happiness, a girl of thirteen who barely escaped a massacre in 19th century Wyoming. “Hazel eyes,” the man called her. California Joe—he was a real man, although not as good of one as the song made out.

Sometimes the man sang happier songs, but most of them were slow, western ballads that could keep Nicolas Sparks writing for decades.

And the little girl loved them all—especially California Joe and one about a cowboy who left his sweetheart alone on the prairie after a quarrel. One called “Cowboy Jack.”

As you’ve probably surmised, I was the little girl, and that man who sang and stirred the hearts of our family at nearly every gathering was my father.

How I miss those days.

For years, I wanted to give Jack a happier ending. See, the song goes like this. A lonely cowboy (with a heart so brave and true) meets and falls in love with a maiden (with eyes of heaven’s own blue). Alas, as with all good romances, the couple quarrel and Jack rides away. He finds a new band of cowboys and would have been just fine, but someone asks him to sing a song to “drive all cares away.” Alas, the song he devises is one about a “lonely maiden who waited for her Jack.”

Of course, he rides off to ask forgiveness. It’s all his fault. He arrives too late. She died of a broken heart on the “lonely prairie where skies are always blue.”

After I began writing, the idea came to me to turn those songs Dad sang—old ones that had been passed on and down through many different versions—into novels. I’d write all the subtext the songs left out.

I’d give them happy endings.

Of course, that’s easier said than done. One by one, I figured out how to do it, but Jack… well, I didn’t want to change the stories. I just wanted to leave on hope instead of despair

Shakespeare to the rescue!

I was watching Kenneth Branagh’s Much Ado about Nothing adaptation, and the answer came to me so clearly. It had the solution I needed. So, I smooshed the song and the play together. Inside, you’ll find the characters Shakespeare created (including Dirk and Deborah and their biting repartee—they steal the show!) in the setting and with the elements of the ballad, too.

Dad’s older now. His hands are gnarled with age, swollen with arthritis. His mind is slipping away. Today, you’ll find his guitar at my house. My son now owns it, but he doesn’t know the songs I heard played on the old Goya. Still, when I take it out of the case, tune it up, and pluck the strings, everything shifts. Suddenly, I’m nine years old again, sitting on my uncle’s stairs, just out of sight, watching. Listening. Heart breaking.

See, I’ll never hear my father play again, and I can’t play either. So, the songs will have to live on with stories of Mary, Jethro, Maggie… and of course, Jack.

This book was originally published in 2016 and has gotten a cover face lift.
In this book we meet Jack. Jack has some trust issues after a rough and troubled upbringing. Because of this he has a hard time trusting women. He is bound and determined to not let a woman in. Enter Hazel. She comes from a well to do background - and is not stuck up about it. Her father is a wealthy banker.  Jack feels drawn to her - kind of captivating. I enjoyed watching their relationship unfold (without all the gushiness) This book contains romance, forgiveness, and real feeling characters. This author always writes such amazing books. Her writing flows off the pages and you can feel like you are there.
I received a copy of this book through the Celebrate Lit blogging program all thoughts are my own.

For the Love of Literature, September 23

For Him and My Family, September 26

She Lives To Read, October 1

Spoken from the Heart, October 4

To celebrate her tour, Chautona is giving away the grand prize package of a paperback copy of the book and a $25 Amazon gift card!!