Elizabeth Van Lew is one of my favorite Civil War Spies -- She was so intriguing to read about - and I loved every moment of her. Ms. Van Lew, along with other women that risked their lives inspired my story that I am working on currently. 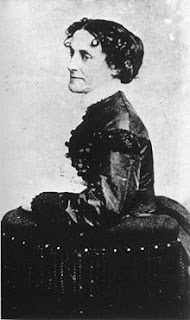 In regards to the American Civil War one of the most effective Union Spies was Elizabeth Van Lew. Van Lew was born on October 25, 1818. She was born in Richmond, Virginia. She was sent to Philadelphia, Pennsylvania to obtain her Quaker schooling and she inherited a lot of her Northern sympathies. When she returned home from schooling, “"Slave power," she wrote in her diary, "is arrogant, is jealous and intrusive, is cruel, is despotic." Outspoken and rebellious, she appeared to her neighbors to be more than a little eccentric and soon became known as "Crazy Bet."[1] Once her father passed, her mother and Van Lew freed some of their slaves. Van Lew would then with her mother aid the Northern cause.
Van Lew’s parents were Northerners and once they were married they had moved to Richmond. This was one of the reasons that Van Lew had a Northern Education. This education since was primarily Quaker run, leaned toward abolitionist teachings. These would stay with her always and she would stay connected with the Quakers.
A heart changing experience was during a visit to Hot Springs. Van Lew, who was also called Miss Lizzie, was hanging out with the daughter of a slave trader. The girl was telling Miss Lizzie about some of her father’s experiences as a slave trader. She mentioned how they had recently sold a slave mother and baby on the slave market. When the mother was sold to one master and the baby to another the mother fell over and died. This was a defining moment in her life.
“What a memorable day was the 17th of April 1861. How can I describe my feelings when on my way down town, looking towards the Capitol, I saw the flag of treason floating over it. [Government] John Letcher surrendered the State.”[2] She was very saddened to see all the anti-Union support. Since she was living in a border state she had been hoping that they would not be a state that would secede. She knew that she had to aid the Union.

After the secession of the Southern States and the Confederate States of America were created those who supported the Union lived in fear. They would live in uncertainty of their own future. They knew that with the secession war would be imminent. Mobs would go into private houses and attack the loyalists to the Union. The loyalty to the Union was now considered treason and families’ names were cursed and slandered.
At this point the Van Lews were known to be staunch supporters of the Union. Their defiance and resistance to embrace the Confederacy would result in personal threats against them. They knew they had to rethink things to not lose everything. “The Van Lews quickly realized their mistake. To avoid deportation, imprisonment, and even possible execution, they had to lead a double life: pretend loyalty the cause while praying and working for the Union. They took flowers and religions books to the South Carolinians at the fairgrounds.”[3] This worked. The threats ceased toward the Van Lew family for a while.
Van Lew “would send valuable intelligence to Union officers, provide food and medicine to prisoners of war and help plan their escapes, and run her own network of spies. “She is considered the most successful Federal spy of the war,” said William Rasmussen, lead curator at the Virginia Historical Society.”[4]  Once her father died, Elizabeth and her mother freed all the family slaves. Several stayed on to work for the Van Lews. One in particular, helped work in the network of spies that Van Lew had created.

One of the things that Van Lew would involve herself in is making sure that Union Prisoners were treated fairly. The prisoners were fellow loyalists that needed help and could be valuable sources. They could provide information on the strength, position, information on resources of the Confederate Army. She knew that she had to find out a way to get the intelligence and get it to the Federal Authorities.
Once she was able to gain access to the prison, which she did so by baking sweets and treats for prison officials, she set right to work trying to get information. Prisoners soon learned to communicate by underlying words in books. The underlined words would be reviewed and strung together to make a code. Van Lew then learned that she could drain the contents of an egg and fill it with little slips of paper that would contain messages. Once suspicion fell on them again they had to show their Southern colors to cast suspicion off of them.
After a trip with her friend in the Van Lews’ carriage to U.S. Congressman John Minor Bott’s farm, the Union would realize what an asset they had in Van Lew. She dove deeper into helping within the prison. Her aid was no longer tolerated so she had to become more creative. She was able to influence surgeons to place prisoners in hospitals where some of her servants worked. This allowed her servants to visit them and give them food. She would be able to pass information through secret space in custard dishes. The prisoners would send messages back through the same dishes.
One of the biggest boldest moves that Van Lew was involved with was helping Erasmus Ross (who was the nephew of a Union sympathizer) obtain a position in the Libby Prison. This would allow her to create and forge a bond with prisoners that were housed there. One of the courier/helpers, a young 15 year old girl named Josephine helped in a daring move. Union Captain Harry S. Howard and assistant surgeon John R. McCullough were in Libby Prison being treated for minor injuries and illnesses. Josephine brought a pouch of fine Virginia Tobacco with a note in the bottom of it that said “would you like to be free? Then be prepared to act. Meet me tomorrow”.
Josephine and McCullough created a plan to put into action. Howard helped McCullough pretend to be dead. Howard covered him with a blanket and they carried him to a makeshift morgue. McCullough laid there from midday until dusk. After a distraction by other inmates, McCullough and Howard walked right out of the hospital and met Josephine. They were successful due to the help of Elizabeth Van Lew.
She eventually moved into assisting Captain Howard. They knew she was capable and careful. They wanted her to be head of Butler’s spy network which she gratefully accepted. She then had to learn how to cipher messages and would carry a cipher key with her.
She had set up five relay stations that were set up between Richmond and City Point (Grant’s headquarters). Couriers would pick up the messages from Van Lew and take them to one of these relay points where another courier would meet them and continue the journey. These relay points could have been anywhere, such as a vegetable farm on the edge of the city. Information that was passed through these relay stations were able to help Union Major General Philip H. Sheridan launch a series of attacks through and around Shenandoah Valley.
Ulysses S. Grant who was named general in chief of Union Armies in 1864 by President Lincoln was forever indebted to Van Lew. Her intelligence that she and gathered and the couriers that she managed were efficient and helpful.