I really like to learn about varying people and figures that seem to have been forgotten in History. This term my grad school class was: Russian Revolution. My paper for the term was: Women's Death Battalion. These women were very interesting to read about. Below you will find excerpts from the paper that I turned in so that you can read about them too! 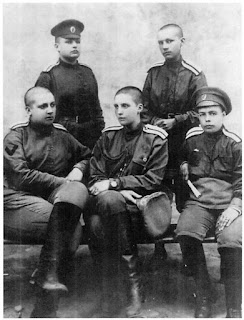 With the overthrow of the Tsar regime, Russia had started to create a climate that involved major social change. This would impact women in the military. As we have learned from previous readings, the time from the March and October Revolutions caused things to happen quickly. The shift from Imperial Russia – that preferred autocratic order, patriarchy, privilege, and a class system to the complex mix of labor reform, women’s rights, land sharing, civil rights, and bread for masses. Women went from hiding their gender to enlist to be able to join the Women’s Death Battalion that was led by a peasant girl.


The Revolution brought forth a lot of change for Russian women.  They were now afforded other opportunities than just being a mother or the wife of a noble. They were now being offered the chance of higher education. Once the Revolution started the classes started to work together to keep the forward movement. Women were now seeking opportunities that they had previously only dreamed about. The creation of the Women’s Death Battalion would instill hope again in the weary, tired soldiers of World War I. These women were brave and were able to push past the enemies when their male counterparts would not.

Maria Bochkareva, is a most significant figures of the Russian Revolution that is overlooked for her place in history. She grew up as an illiterate, poor, peasant girl. She overcame these odds, to become commander of the Women’s Death Battalion. She fought hard and brave. She eluded capture by the Bolsheviks by going to the United States. She eventually returned, was captured and was executed. While historians have touched on her in passing, but have not given her the credit she deserves. To tell the story of the Women’s Death Battalion it is important to also know the story of Maria Bochkareva. Knowing her plight and her story helps one to understand the creation of Women’s Death Battalion.

.
Laurie S. Stoff in her work “They fought for the Motherland: Russia’s Women Soldiers in World War I and the Revolution” notes that the all-female military units are often a subject that is scorned then a serious scholarly study.
During the time of the formation of the Women’s Death Battalion, The Russian Army was starting to be demoralized. They were running out of food, water, and gear. While they were hoping everything to change after the collapse of Nicholas II. However, even Kerensky could not rouse up the troops. Kerensky resorted to unconventional methods. “The formation of “revolutionary” units including special “shock” detachments and “battalions of death”, from volunteers drawn from the rear.”[1] The goal was to try and shame the soldiers into returning to their combat duties.
Once the Bolsheviks took over, there was a lot of erasing and hiding of what actually happened with Women’s Death Battalion. There was a lot of censorship of the press and information that happened after the October Revolution. We see how the history of the Women’s Death Battalion is murky due to political propaganda. There is the need to retrace history – draw from the biography that Bochkareva dictated and rebuild the history of the Women’s Death Battalion.
[1] Stoff, Laurie. They Fought for the Motherland: Russia's Women Soldiers in World War I and the Revolution. Lawrence, Kan.: University Press of Kansas, 2006. Pg. 61
Posted by Connie Hill at 2:31 PM