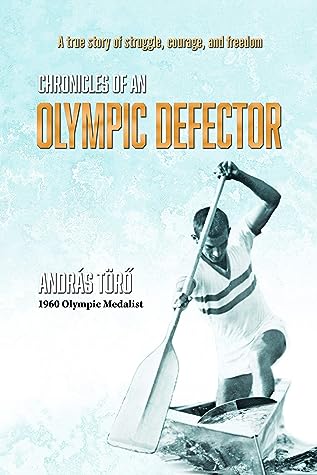 As the iron curtain descended on his home in Budapest, Hungary, András Tör turned to one of the few opportunities permitted by the communist government the sport of canoeing. Selected to represent Hungary in the 1960 and 1964 Olympic Games, he made a life-changing decision. With no money, no belongings, no marketable skills, and no comprehension of the English language, András Tör decided to defect.

About the Author
András Törő is an Olympic medalist and retired naval architect. He was inspired by his family and many friends to share the story of his unique odyssey from communist Hungary to the free world by way of the Olympic Games. In his spare time, András continues to enjoy his sport by coaching or practicing. Woodworking and spending time with his grandchildren are his other passions in life. He currently resides in El Cerrito, California, with his wife, Jane. Chronicles of an Olympic Defector is András Törő’s second book.

This book was a very informative and great read. This is a personal memoir. I was not familiar with this time period - and I learned a lot while reading.

a person who defects from a cause, country, alliance, etc.

This definition is significant since Communist Hungary had "lessened" the reigns and partook in the Olympic games. The author mentions in the book that "my native country, Hungary, was under Soviet occupation and was oppresed, particular after the uprising of 1956. Traveling abroad was only for the privileged class, which included Communist party functionaries, scientists and international sportsmen." (pg. 3) The author tells his story in biography form - He starts off with his beginnings, his introduction to sports, his journey to the Olympics, to his journey to the United States and his plight for asylum.

One of my favorite things about this book - is the pictures. I love reading memoirs, I love reading about where people came from and how they got to be where they are. The whole book is the author's journey. It's filled with determination, heartache, censorship and the relief when he defects.
I love how he discussed the coverage in the different newspapers around the world. Most were talking about how he defected, how he had placed 4th and made the decision to leave, and his own country did not cover it. He stated that the way people found out was through word of mouth.
I commend the author on how brave he is to leave his home country to start from scratch. This is a wonderful read.
I received a copy of this book through the publisher, Mascot Books. All thoughts are my own