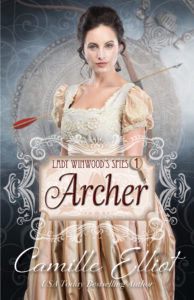 She met him again by shooting him.

Part one in a Christian Regency Romantic Adventure epic serial novel with a supernatural twist. After four seasons and unmarried because she is taller than most of her dance partners, Miss Phoebe Sauber receives the shocking news that she is being callously banished from her father’s estate because he is remarrying. Feeling betrayed by her father and by God, and wanting to escape her family’s presence, she attends an archery tournament with her friends.

But her perfect aim fails her, and her arrow hits a piece of paper held by Mr. Michael Coulton-Jones, whom she hasn’t seen much in society in several years. But strangely, her arrow tears a section of the paper with a partial symbol that looks eerily familiar to her.

He met her again while searching for a killer.

Michael had quit his work as a spy for the Foreign Office when his brother was poisoned. His search for the murderer leads him to Apothecary Jack, a criminal underworld leader with a penchant for poisons, who is gathering a powerful army through an alchemical potion that can give men supernatural strength.

But his path unexpectedly crosses again with Miss Sauber, who saves him from a trap laid by Jack. She and her Aunt Laura, Lady Wynwood, have found a vital connection to Apothecary Jack and the mysterious group he works for.

Now Michael, who had vowed to never again allow civilians to come to harm, must work with a nobleman keeping dangerous secrets, a human lie detector, a chemist, a fellow former spy, and the one woman he’s never allowed himself to get close to.

And it is only this ragtag group that stands against a traitorous organization that could enable Napoleon to conquer the world. 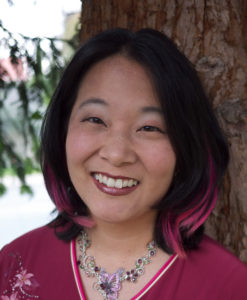 Camy writes Christian contemporary romance and romantic suspense as Camy Tang and Regency romance as USA Today bestselling author Camille Elliot. She lives in San Jose, California, with her engineer husband and rambunctious dog. She was a staff worker for her church youth group for over 20 years and she currently plays on one of the Sunday worship teams. Visit her websites at http://www.camytang.com/ and http://www.camilleelliot.com/ to read free short stories and subscribe to her quarterly newsletter.

I love Regency romances! I started reading them when I was 13 years old and haven’t stopped since.

There’s something about the Regency time period and culture that’s glamorous and decadent and the epitome of elegance. The resplendent dresses! The brooding, romantic Lord Byron and the distinguished Beau Brummell! Dashing naval captains and army lieutenants, glittering ballrooms and winsome debutantes!

The flip side of my personality loves romantic suspense and action adventure. I love seeing strong women face danger with courage and smarts, and strong men willing to do anything to protect their loved ones and fight for justice.

So, basically, the Lady Wynwood’s Spies series grew out of my desire to see Mission: Impossible in the Regency era!

My Regency “IMF” team is brought together when my spinster heroine, a botanist and a skilled archer, discovers that her late uncle had ties to a mysterious group. She goes to her aunt’s best friend, a gentleman who has secretly been a spy for decades, and he forms his team of ex-agents and uniquely gifted civilians to battle this group of alchemists who want to ensure that Napoleon wins the war with England. (Cue the Mission: Impossible theme music!)

I’ve also structured the series a little differently. It’s a very long serial novel, similar to a Japanese manga or light novel series, with 12 volumes that each have a completed story arc, but the main plot isn’t resolved until the end.

I hope you’ll join me on this epic Regency romantic adventure!

Lady Wynwood’s Spies 1: Archer By: Camille Elliot is a Christian Historical Romantic Suspense book. This is the first book that I have read by this author. This book is part of the Lady Wynwood's Spies  series. There are some references to characters in a prequel, which I have not read. That being said, I enjoyed this book very much. This book is set in London England in 1811. Regency Fiction is not a genre that I read a lot of -  but I always learn so much when I read them. Miss Phoebe Sauber is taller then most of the guys that pursued her. She has been dancing with suitors for four seasons. She stands out due to her height. If that factor is not bad enough, her father is remarrying and she is kicked out of the estate she has been living in her whole life. She is angry, betrayed and hurt. She even wants to turn her back on God. Trying to escape the nightmare that has become her life, she goes to an archery tournament with her friends. This is where the author did some amazing research. While I know what archery is, I did not know how much detail goes into it. However while she is there she sees an old friend, Michael Coulton-Jones. He is someone she has not seen on the London social scene in awhile. Michael is looking for a killer. However, when Phoebe inquires about a symbol on a paper she is thrust into an underworld of potions and so much more. The author has crafted a very suspenseful storyline that will take your heart on a rollercoaster of a journey. She has crafted some unique characters. I look forward to finding out what happens next.

Inside the Wong Mind, February 17

Through the Fire Blogs, February 18

For Him and My Family, February 23

Labor Not in Vain, February 23

Adventures of a Travelers Wife, February 28

A Good Book and Cup of Tea, February 28

To celebrate her tour, Camy is giving away the grand prize of a 1-year subscription to Kindle Unlimited!!