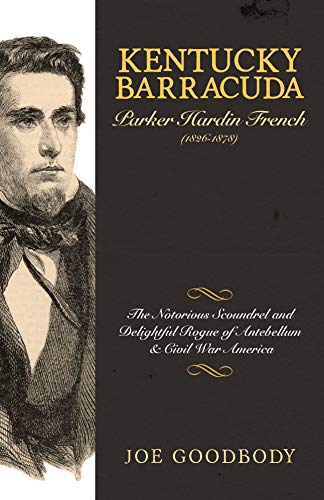 Barracuda: A con man, hustler, or swindler. Or, to put it more directly: Parker Hardin French. Though a notorious scoundrel in his time, French has been relegated to a minor footnote in American antebellum and Civil War history. Through his research into primary sources, Joe Goodbody pieces together a picture of Parker Hardin French as he lived and schemed, bringing him out of the shadows and into the spotlight.

About the Author
I am a retired United States Army Colonel and corporate leader. My wife Carol and I have been married for fifty years with two sons and four grandchildren.
I learned about Parker Hardin French while working on family genealogy and researching great grandfather Francis (Frank) Alexander Goodbody (1828-1906). Frank was victimized by French as a member of the fraudster’s California bound gold rush expedition in 1850.  The endeavor faltered in mismanagement and collapsed in deception, fraud and forgery.
How did my great grandfather— whose family viewed as a smart, skeptical, and a very tough guy— get swindled? After seeing the Wikipedia article on Parker Hardin French, I became fascinated with the man and the story. Casual interest changed to intrigue and then to a six-year compulsive drive. I hit the web, gathered references, researched digitized records and newspapers, and visited historical archives and government record centers. Great Grandfather, I found, was not alone in being conned; he was in great company with foreign leaders, business tycoons, prominent politicians, frontier toughs and army officers. And, some of Parker French’s capers and antics were downright funny.
As I researched I discovered that his story was much more significant to history than previously documented. It also provides an interesting perspective on antebellum and civil war Americana.
While I proudly called myself a history buff before this research, I started questioning that characterization as I discovered elements of American history of which I was completely unaware. When asking other well-read acquaintances and even history professionals, I found that my ignorance was not atypical.

My Thoughts:
One of the things I love to discover, is new historical figures that I have not heard about. This was the case with Parker Hardin French. In this book you will meet Parker Hardin French. Born in 1826, in Kentucky. He loses his mother in his childhood and goes to stay with his uncle. He grew up and was intelligent, interesting and very charismatic. You follow his journey to Alton, Ill when he is 18 years old. While you continue on you will learn about all the swindling and hustling that he did. There were times that I was sitting there with my mouth wide open. I could not believe he got away with some of the stuff that he did! One of the things that I really enjoyed throughout this book was the extensive research of cities, people, family, etc. I learned a lot about during this journey. I love that the author has taken a lesser known historical character and brought him to life. This book is easy to follow. It is written with both the history buff and regular audience in mind.

I received a copy of this book through the publisher, Mascot Books. All thoughts are my own.